9.30am Holy Communion (sung) in church 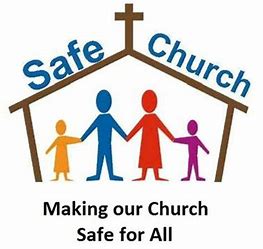 St Mary the Virgin Welcomes You 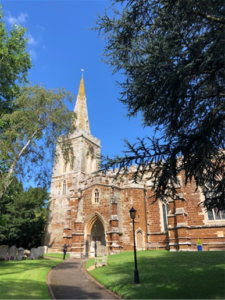 On behalf of the whole parish of Finedon may we invite you most warmly to step over our virtual threshold. You will find within our contact details and details also of  forthcoming services and events here at St Mary the Virgin. We are, of course, the parish church not only for the those who worship here but for everyone in Finedon, and the social calendar is almost as busy as the ecclesiastical calendar. Whatever you seek – friendship, community, something to challenge and stretch you, something to give you comfort and peace, the love of Jesus Christ, or simply the satisfaction of curiosity – you are most welcome to step over our real threshold too and see what we have to offer.

Yours in Christ, St Mary the Virgin.

The church of  ST. MARY-THE VIRGIN consists of chancel, north and south transeptal chapels, clearstoried nave of four bays, north and south aisles, south porch, and west tower. The tower is surmounted by a lofty spire and the porch has an upper story. There is a modern vestry on the north side of the chancel.

Of the original 12th-century building nothing remains except the font, the church having been entirely rebuilt at the beginning of the 14th century. With the exception of the tower and spire it is all of one date, and is one of the finest examples in the county of a church of this period. The tower and spire were erected about fifty years later. The whole building is therefore substantially of one style and it preserves a unity in design which gives it particular distinction.

The Organ Of St. Mary’s CD

A Message from the Pulpit July 2022

It is a joy to be able to preside and preach at many of the services during this time of vacancy and I am grateful, as I am sure we all are, to those who help prepare for services and assist in worship. It is just ten years since I retired from stipendiary ministry after 39 years of moving around the Church of England. Kathryn and I have been pleased to be made so welcome with you in Finedon as we have made our spiritual home here.

My journey to ordination began as a schoolboy when I started to explore the possibility in my home diocese of Liverpool. When I had completed my training, the diocese of Liverpool had an excess of ordinands and I was free to seek a first curacy position further afield. Eventually I was ordained in 1973 and became assistant curate of Holy Trinity Skip-ton in the diocese of Bradford. After three years “learning on the job” under my training incumbent Canon Christopher Martineau I moved to my second curacy at Bradford Cathe-dral. It was that I met and married Kathryn. Canon Martineau conducted our wedding ser-vice in the Cathedral on Easter Monday 1977. The following year I took up my first incum-bency post as Team Vicar in the Grantham Team Ministry with responsibility for St John the Evangelist Spitalgate. Our daughters Amy and Ellie were born while we were in Gran-tham. St John’s is the church by Grantham railway station – sadly it is scheduled for closure by the diocese of Lincoln.

In 1982 we moved to Deeping St James and I became Vicar of the Priory Church where we stayed for 14 years. DSJ, as we call it, is on the edge of Lincoln diocese. We were eight miles from Peterborough Cathedral – Lincoln Cathedral was 43 miles away; we could see Peterborough Cathedral from DSJ Church roof. Many of you will be aware that church music is important to us. Kathryn became director of music at Deeping St James and built up a fine choir.

I moved diocese again in 1996 to become Rector of Middlewich with Byley in the Chester diocese. My induction took place on St Cecilia’s Day as had my induction at Deeping St James fourteen years earlier. St Cecilia is the patron saint of music! My final move was to become priest-in-charge of the Stanwick Group of Churches – that is Stanwick North York-shire, not Northamptonshire! I eventually became its Rector ten years later. Mine was the last Parson’s Freehold to be granted in the diocese of Ripon and Leeds. For the last five years before I retired I was also Area Dean of Richmond (N Yorks) – one of the largest dean-eries by area in the church of England, 56 miles from east to west.

And so after 39 years moving around, retirement brings me to the diocese of Peterborough where I have permission to officiate. Thank you for your prayers and support.

God bless you all.

Detailed information in the Sunday Sheet each Sunday morning