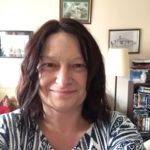 I have kept a diary ever since I was 10 years old. At the back of my mind was always the idea that I would write my autobiography. However, that is where it stayed …… until the beginning of this year when I made a start. I decided to concentrate on the first 22 years of my life and wrote the first two chapters: the social setting for the period (post-war to late ’60s); and the location of where much of the first 22 years were set, Rochdale, Lancashire, the town of my birth. Then when lockdown started I decided to complete it.

Chapters included my family, friends, school, hobbies, childhood, adolescence and training to become a teacher. 42,000 words later the narrative ended with the day I left home to travel with two friends to start my teaching career in Corby.

As a child and teenager, my main interests were my bike and pop music; hill walking and mountain climbing started when I was 17 – and still goes on. Contemporary music has always been the backcloth to my life and my i-phone contains about 4,000 songs from the mid-’50s to 2020.

When asked to write an article based on my autobiography, I decided to focus on cycling, as that was predominant during these years. My first bike was a tricycle, which stayed with me until I was 8 when my Christmas present was a second-hand bike – basic with no gears. I could not ride it at first, but soon got confident and then there was no stopping me! My territory expanded from the estate where we lived to the whole town, which was about 6 miles from end to end; mum didn’t mind where I went as long as I kept away from the town centre, which I did at first.

For passing my Eleven Plus, my parents bought me a new bike, with three-speed and straight handlebars. It had a speedometer and I started measuring my daily mileage, which passed 50 per day when I was 12 and 100 in a day at the age of 13. A friend and I joined the Youth Hostelling Association and we went on our first youth hostelling trip at the age of 12 to stay one night at a youth hostel in the Yorkshire Dales. The following year this was extended to two separate two night stays in Cheshire and Derbyshire. Six of us formed our own cycling club; we would meet each Tuesday evening to plan the ride we would have the following Saturday.

When I was 14 I outgrew my bike and I got my first racer – drop handlebars, 5 speed and alloy wheels – it was as light as a feather. Although it had no means of recording my mileage, I continued to estimate, as I knew how far it was between different places. Youth hostelling trips extended and we cycled to the Lake District for a four-night stay and I fell in love with the wonderful scenery. Visits there now are to climb the mountains and it is still a stunning place. The summer of 1961 included a week-long tour cycling all the way from Lancashire to Cheddar in Somerset and back – 500 miles in 6 days.

For three years the vast majority of weekends between March and October included a day trip, usually cycling between 70 and 110 miles in a day. My maximum daily mileage was 125 when I was 18. The highest annual total was 7,000 miles.

The height of my cycling career was in the summer of 1963 after O Levels – a tour of the highlands of Scotland – two 16-year-olds 400 miles from home. The idea was conceived the previous summer when I was on holiday in Scotland with my mum and dad. My friend and I planned a youth hostelling tour starting and finishing in Glasgow.

We left home shortly before midnight one Saturday evening and cycled to the station in Manchester; our respective parents were there to see us off on the 1:00 am train. The seats were not conducive to a comfortable sleep, but we were too excited to sleep anyway.

It rained one day only, and how! but otherwise, it was dry and increasingly warm and sunny. We rode through The Trossachs, over Rannoch Moor and down Glencoe (when it rained), through Fort William on the Road to the Isles to Mallaig and on the ferry to Skye; on to Inverness, with a rest day and back down the Great Glen to Oban and Glasgow. It was brilliant. All Scottish hostels at the time were self-catering, which was another new dimension for both of us! Meals were a mix of basic cooking, ie tinned food and eating in cafes.

We had a rest day on Skye and cycled to the village of Elgol, a day, which nearly 60 years later is still vivid in my mind. I started my autobiography with this diary entry as a preface. It was originally written shortly after the event through the eyes of a 16-year-old boy.

Corn flakes and bread for breakfast

A free day on Skye so went to Elgol. The weather was dry and cloudy, but sunny in the afternoon. The road was narrow undulating and very quiet, passed scattered crofts with mountains in the background; through Torrin; had a short stop for a drink from a shop; round the head of Loch Slapin like a horseshoe with the mountain of Blaven in the near foreground. The road got narrower with some potholes so we had to ride carefully; then increasingly undulating with steeper and longer ascents and descents. Suddenly we descended a steep hill into Elgol at the end of the road. First, we went in a café and had a pot of tea, scones, pancakes and cakes – as much as you want for 2/6 (12.5p) so we took advantage. Sat outside and admired the brilliant sea views and sniffing the sea air; saw the islands of Muck, Rhum and Eigg. Rode down to the beach, a 1 in 4 hill – this is where the road ends – in the sea. Locked the bikes and explored – threw stones into the sea, climbed on the rocks and soaked up the wonderful atmosphere; noticed a primary school practically on the beach. This is an absolutely wonderful place and somewhere I would long to come again. Sadly left pushing up the 1 in 4 and then rode back to Broadford, by which time strong memories had formed of that day. Into the café, we visited yesterday and had sausage and chips again – plenty of chips. Made another meal of soup, dehydrated potatoes, more sausages and beans, cake and tea. Walked into Broadford and wrote a letter home while sitting on the pier. One of the best days I have ever had. I have to return next year.

Cycling continued to be an important part of my life until 1966 when mountain climbing took over and is still prominent today.  Those were different days. I am not sure that children and teenagers

would be allowed to enjoy the freedoms we enjoyed in those simpler and safer days.