This month I want to take you over the county border to Bedfordshire, in fact just 9 miles away to a sleepy little hamlet called Knotting. It is so small that one blink of the eye and you are through it. About 4 miles down the A6 towards Bedford turn off to the left to Newton Bromswold. Pass through the village of Newton Bromswold and a few miles further on you will come to Knotting. The church is set back from the road and in the summer the graveyard is a haven for wildlife. Although the church is redundant a handful of local people keep it clean, carry out minor repairs and sow the churchyard with wild-flowers. It is now in the care of the Churches Conservation Trust. 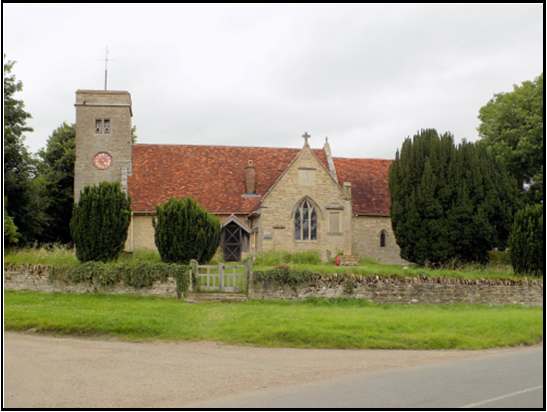 Inside, the church remains almost untouched since the Reformation. Uneven flagstones cover the floor, the walls are covered in a pinkish plaster and the pews in the nave are roughly hewn from oak in all likelihood by a local craftsman.

The only signs of modernity are electric lighting and a harmonium in a side chapel. One of its most distinguishing features is a 17th century two decker pulpit on the north side of the chancel arch. The lower deck was for the reading of services and the upper deck for the sermon.*

It also has a tower clock with just an hour hand. It has not lost the minute hand it was made that way, a few single hand clocks can still be found on

The two decker pulpit with

churches and public buildings. For those of you who have not heard of St. Margaret of Antioch this is not surprising, she is almost certainly a fake saint. Although popular with crusaders in the 11th century she had been declared an apocryphal saint as early as 494 AD by pope Gelasius. According to legend (or at least one legend) she was the daughter of a pagan priest who turned her out of the house for converting to Christianity and lived for a while as a shepherdess.

She was abducted by the Roman governor of Antioch, Olybrius, for the purposes of seduction or marriage but she refused on the grounds that she was a Christian. She was then tortured in unspeakable ways during which she was swallowed by a dragon (or as other accounts have it she had a vision of being swallowed by a dragon). The crucifix that she carried so irritated the dragon’s 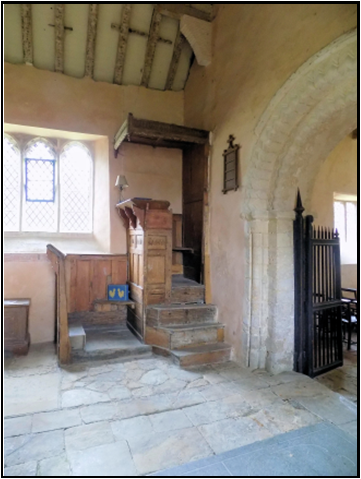 innards that it burst open thus releasing her.

In medieval art and legend dragons, serpents, lizards, salamanders and other slithery things are symbols for Satan. She was, according to legend, beheaded in the reign of Diocletian. In the west St. Margaret of Antioch’s feast day is the 20th of July and although the church at Knotting is redundant a patronal festival service is still held on that day each year. .

There are still a handful of Anglican churches named after St. Margaret of Antioch and she seems to have escaped the culling of saints during the Reformation to remain in the Calendar of the Book of Common Prayer. She should not be confused with St. Margaret of England an obscure Cistercian nun who spent her life in devotion, visited the Holy Land and, shockingly, never met a dragon

Rugged interior with uneven flagstones and two decker pulpit to the left of the chancel arch.

But, if you thought that is all there is to this little church in Bedfordshire you would be wrong. In the 17th century the rector, the Revd Arthur Alvey MA, was defrocked and removed from his living for not only allowing but participating in cock-fighting in the chancel. 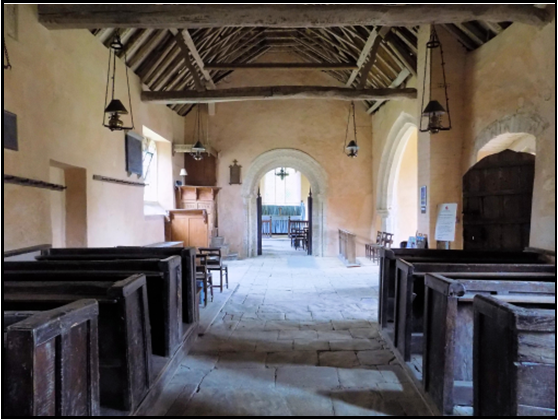 (Well, who would you rather have holding your stake money, the local poacher or the rector?)

In 1637 Archbishop Laud ordered that spiked gates be erected at the chancel entrance.

However, Laud appears not to have considered the ingenuity of the people of Knotting who erected wooden

gates and not metal ones which would have been more of a deterrent. So although the

gates look splendid they are really quite flimsy, however, the spikes are still quite effective.
The spiked chancel gates:

a deterrent to misuse of the chancel

Parts of the church date back to Norman times, certainly to the 13th century and perhaps earlier. There is only one transept 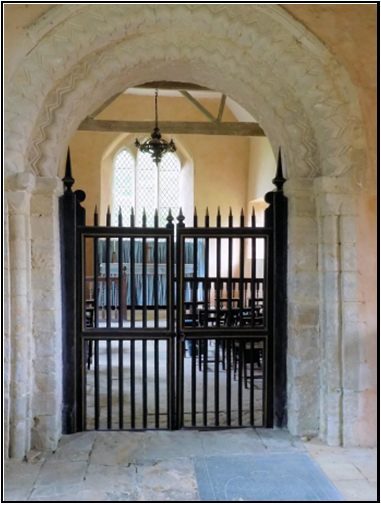 creating a small chapel on the south side now with chairs facing north to the pulpit. Perhaps there were plans to add another on the north side but Knotting has only a handful of houses and a tiny population. There is also a little chimney emerging from the tiles just to the right of the west door. The church is well worth a visit for its simplicity and rustic location.

*Three decker pulpits which can still be found in some churches, had much the same function but here the parish clerk occupied the lower deck and read or intoned the responses and psalms which the congregation then repeated.