From the Vicarage February 2021

I write this while Finedon in blanketed in snow, which is sparkling in sunshine. I don’t think gingerbread stone could look possibly look lovelier than it looks in snow. How lucky we are, I thought this morning, as I took the dogs out, Maybe not so lucky for them, being low slung creatures not really designed for running though drifts, although they didn’t look in the least put out by it.

A reminder from nature that whatever’s happening in politics, or pandemics, or Peterborough Diocese, we can still be stopped in our tracks by beauty.

I always get this with the first appearance of snowdrops. The simplest of flowers, but how they lift the spirits, first arrivals as winter begins to turn, harbingers of spring. Traditionally they are known as Candlemas Bells for they come when Candlemas comes, February 2nd, in the Middle Ages much more celebrated than it is today. Interestingly, it is still in the calendar, even if the traditions around it have faded away. It was traditionally the day when the last of the Christmas decorations came down, the greenery, and traditionally the day when candles for use in church in the year ahead were blessed.

Two things to keep in mind in this month of Candlemas then: it is time to put away the things of bleak midwinter and look for the spring; and it is time to remember that we are to be lights in darkness, as Christ is our light in darkness,

It has been a tough twelve months, dark for many, and we are not out of the darkness just yet. But we will be. 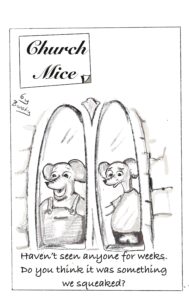 Let there be light! And let us be bearers of that light!

*St Ottone Frangipane, which sounds like a pudding, I know, is not a well-known saint, but he saved his city, Ariano Irpino in Campania, from a plague in 1528.